I’m not sure if anyone remembers my original kitchen backsplash post.  I bought a peel and stick wallpaper that looked like bricks.  It looked great for a little while and then it started to come off.  I used a staple gun in hidden spots to hold it on.

It definitely needed updating and I did that last week.  It took most of the week because of how I decided to do it, but the end result with a few new touches in the way of a new curtain topper, new tea towels and a different rug, the kitchen is sporting a fresh new look!

After a while I just got sick and tired of looking at the peeling mess and decided it needed an update.  Look how terrible the brick paper looked once it started to peel off!

I peeled off all of the peel and stick wallpaper.  It literally came off in full sheets.  That was the fast and easy part, although it was a bit painful considering how much work I put in it to start lol.

In the places it actually stuck, it removed some of the paint with the paper.  Not a big deal.

My next step was to remove the transition pieces from each panel to the next.  They were just going to be in the way and not look how I wanted it in the end.  It made for a lot of extra work but I think it ended up worth it.

I used spackling and a few days of sanding to fill in the spaces from the transition pieces and a quick swipe where the wallpaper removed some of the paint to give myself  fairly smooth surface. (I am not a professional “mudder” by any stretch of the word.

Next it was time to start painting the white that I wanted as my background colour.  It took about 3 coats to fully cover the existing green paint…. you can probably see why I wanted it covered in the first place lol! 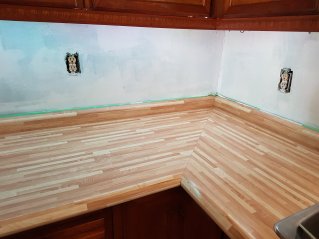 Now came the fun part…. or at least when I thought would be the fun part.  It ended up being almost 7 hours of gymnastic worthy positions to get the stencil into the right places lol.

Here is the first stencil I applied…. 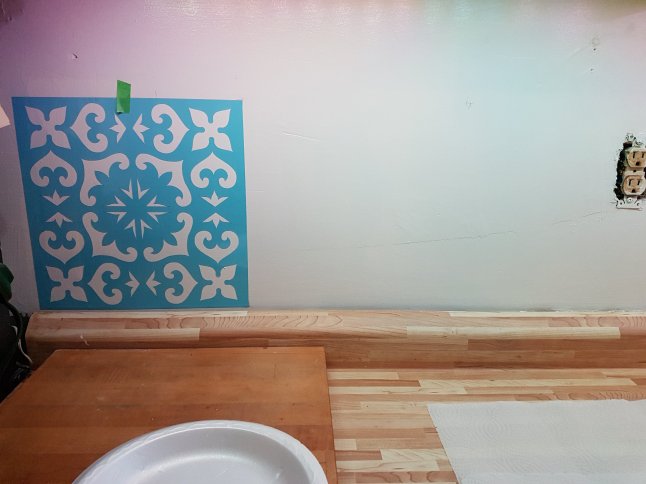 The beginning of the first row…..

Once I got it all stenciled, I realized that one of the partial stencil areas had been done upside down!!!! This meant I had to paint over where I laid these stencils and redo that section but again this proved well worth the effort…. at least after it was all done anyway.

Once the stenciling was done, I brushed on a coat of varethane so that the backsplash could be wiped down when needed without worrying about the stencil coming off!

I rehung the curtain rods and all the baskets where they used to be (dejunking them as I went) and then added a nice new curtain topper, some new lighter coloured tea towels and a different rug and it was done!

And here is the kitchen backsplash fully completed….. AGAIN! 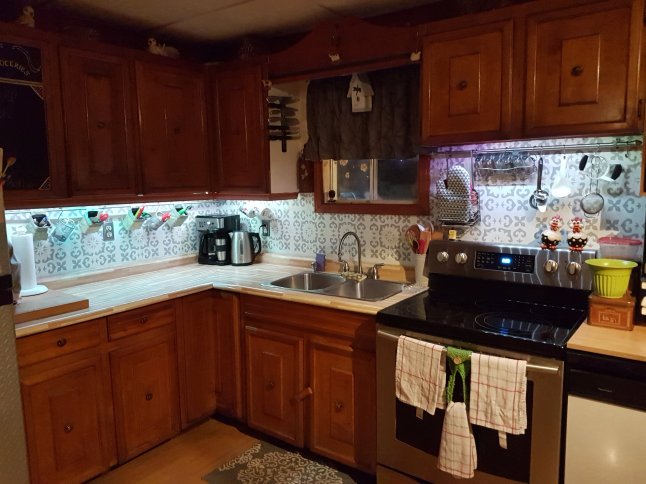